The Versatility of the Decker Pack Saddle

We are repeatedly asked what is the benefit of the Decker Pack Saddle over a sawbuck pack saddle. The Decker Pack Saddle was developed by O.P. Robinett and made by the Decker brothers around 1930 in response to the needs of Forest Service personnel for a pack saddle built to carry heavy, bulky loads for long distances. This rugged, versatile saddle became very popular with the Forest Service and packers in Idaho, Montana, Oregon and Washington and has remained the pack saddle of choice in this area to this day.

What ultimately makes the Decker so versatile is the half-breed. The half breed is a cover that lies over the Decker pack saddle tree and is designed to protect the pack animal from the load. The half-breed is traditionally made of canvas and leather, although some today are made of nylon or Textilene mesh. The lower portion of the half-breed is padded with felt or some other stuffing material for the animal’s comfort. Two wooden pack boards are attached on the outside of the half-breed over this stuffed area. These boards help distribute the weight of the load across the entire rib cage, much like the bars of a riding saddle distribute the weight of the rider along the length of the horse's back.

This simple addition to the Decker Pack Saddle gives it a better overall design for larger, bulkier loads. Long, awkward items like logs, poles, or tent frames can be easily loaded by the packer and comfortably carried by the pack stock because of the protection and weight distribution offered by the half-breed. Indeed, standard items such as panniers can be more comfortably carried by pack stock with a Decker because the bottom of the pannier rests against the pack boards, thus keeping them further off the animal and distributing the weight of the pannier along the rib cage. Lastly, two mismatched loads can be packed by the same animal because of the ability to raise the heavier side and lower the lighter side and balance the load.

Another reason we like the design of the Decker pack saddle is that the hoops of a Decker Pack Saddle are easier and more convenient to loop and slide ropes through when tying loads down. The hoops are also low profile and a nice design for getting large loads closer to the animal’s body where they will ride better. 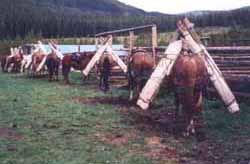 How do you pack a large, bulky or awkward load on a Decker? The simple answer is by mantying or cargoing the load. We know that manties, ropes, knots and hitches can be intimidating to people. That is why we designed the TrailMax™Not-A-Knot pack system. However, when you have an odd-sized load to pack in or out, mantying the load is going to be the safest, most efficient, and often the only way. Here’s a little bit of what professional USFS packer and instructor Bob Hoverson wrote in his book, "The Packer's Field Manual", has to say about cargoing:

Cargoing is where the artistry of Decker-style packing begins. The goal of cargoing is to securely wrap two bundles that can be slung from each side of the Decker Saddle. These bundles must be cargoed in a standardized manner so they are tightly wrapped and the payload is protected from external forces such as dust, rain or snow. Also when packing stock feed (hay, hay cubes, pellets, grain), cargoing prevents the pack stock from attempting to eat from the loads en-route. Efficient cargoing requires the right equipment, an understanding of the theory of cargoing and proper cargoing technique.

Equipment Cargoing requires two manties and two ropes per pack animal. My preference in manties is 14 or 15 ounce white, untreated canvas, seven feet by eight feet in size. The cargo rope I prefer is ⅜ inch diameter, three-strand composite. I like to cut cargo ropes 35 feet long, then eye splice one end and back splice the other. Other types of rope and other mantie materials are available that will likely work just fine. Canvas manties and three strand cargo ropes are my preference, however.

Cargoing Theory It is important to understand the theory of cargoing relative to load weight, load size and distribution of weight within each side-pack. Each load will consist of two side-packs. If numerous items are to be cargoed, such as duffle or camp gear, it is always easier to “build” two sides at the same time. Spread two manties out and sort gear so, as closely as possible, equal weight and bulk are achieved in each side. If single items of equal bulk and weight are to be cargoed, such as hay bales or sacks of grain, then building on e side at a time would be appropriate.

As stated in Chapter Five, stock in good physical condition should be expected to carry 20 percent of their body eight every packing day throughout the season. An 1,100 pound mule should carry 220 pounds on every trip in order to achieve maximum efficiency. This will be 220 pounds minus 30-40 pounds for the saddle and 15 pounds for the two manties and two ropes. This leaves us a 165-175 pound payload, or roughly 80-90 pounds per side. Having said all this, I want to emphasize the “20 percent of body weight formula” is only a guideline. Mules or horses are certainly capable of carrying more weight, and they will always appreciate carrying less weight. However, in order to be humane and fair to the pack animal (and the packer) it is important to try and limit the loads to this optimum weight (not maximum weight). Conversely, if we want to be efficient in our packing, we should strive for 20 percent of body weight each time we cargo a load. 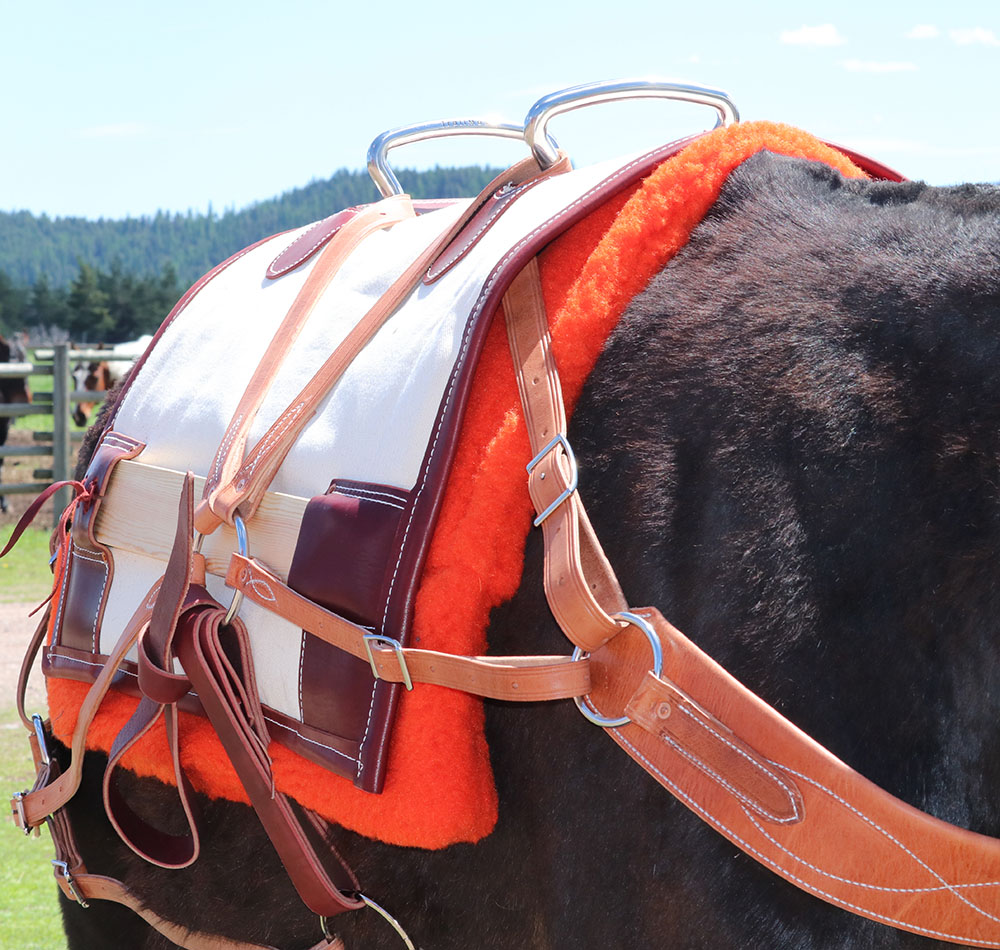 Would you like to go shopping?
Decker Pack Saddle
Sawbuck Pack Saddle

Would you like more information?
Russ On... Balancing your Load
Russ On... Should I Pack Horses or Mules
Russ On... How Much Weight Can My Horse Carry
Sawbuck Pack Saddle
Horse Packing Equipment